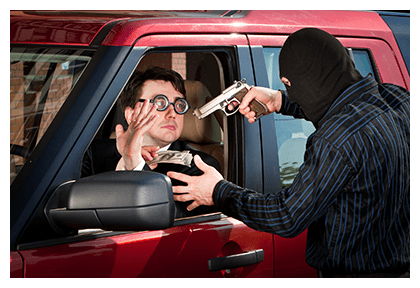 If you are awaiting trial on the charge of robbery in the state of California, you should waste no time in securing for yourself the best possible legal representation. Only by relying on a skilled, experienced criminal defense attorney with expertise in the specific practice area of robbery defense can you maximize your chances of a favorable outcome to your upcoming case.

At Leah Legal Criminal Defense, we have been successfully defending L.A. Area clients accused of robbery for years. Our knowledge of the relevant California statutes and our familiarity with local Los Angeles court processes enable us to effectively serve the best interests of each of our clients.

What Is "Robbery" Under California Law?

California Penal Code section 211 criminalizes robbery, and defines it as unlawfully taking property not belonging to you directly off of someone's person and/or in his or her immediate presence. The definition also includes that the property was taken without permission from the owner/possessor and was taken by means of force or threat.

Robbery is automatically a felony-level crime in California. Thus, it is punished severely in all cases, though additional aggravating circumstances can enhance the punishment yet further.

Most people imaging robbery as a man with a gun holding up his victim and making off with his money or other property. While this is one form of robbery, it is not the only one. For example, a burglar who enters a residence and threatens people who are then present in the building is a robber; as is one who drugs another person in order to easily make off with that person's property; as is one who issues a threat only to escape with property already unlawfully taken into his possession.

The common thread is stealing by force or by fear when another person is present. Other factors simply determine which type of robbery has taken place.

To gain a conviction on the charge of robbery, a prosecutor must demonstrate all of the following elements of the crime to be true beyond all reasonable doubt:

Took - To count as having "taken" a piece of property, it must be that the defendant brought it under his/her control and moved it at least a short distance.

Possession - Possession, as used in Penal Code section 211, need not mean that the property was actually being held or touched by another person. It could also be "constructive possession," where the other person has control over or at least the right to control the property in question.

Possession of Another Peron - Nor is it necessary that the property was taken from the presence or possession of its owner. It could have been taken from some other person who had a right to control it and against the owner's wishes.

In Violation of the Will - And the owner need not even have been aware of your taking the property. If you lacked consent to take it, it is considered "against the owner's will." Furthermore, if threats are used to intimidate someone into giving "consent," it does not count legally as consent.

Fear Tactics - Use of fear to secure property indicates that a threat was issued or implied to harm the person present during the theft, to harm that person's family member, or to damage property belonging to that person. Picking pockets, then, would not count as robbery for lack of "force or fear" being used, but drugging a victim would, since drugging someone is considered force used render the victim unable to resist the taking of his property.

Possible Penalties for Robbery in California

Penal Code section 211 (robbery) is always a felony in California, but it can be classed as either first-degree robbery or second-degree robbery, which classification will greatly affect how it is punished upon a conviction.

First-degree robbery involves incidents taking place in a residential building or structure, while or just after the victim makes use of an ATM machine, or where the victim is a driver or passenger on virtually any form of public transportation (as taxi, bus, subway, etc.)

First-degree robbery is punishable by:

As robberies are “counted” based on how many victims were involved (not on how many pieces of property were taken), using force or fear to rob a single item can count as multiple instances of robbery and will increase your sentence. On the other hand, taking multiple items from the same person in one incident is just one count of robbery.

If, during a robbery, you caused great bodily injury to another person, your sentence can be enhanced under Penal Code section 12022.7 to add 3 to 6 extra years of incarceration.

If you made use of a firearm to commit the robbery, under Penal Code section 12022.53, your sentence can be enhanced by an extra 10 years behind bars. If you fired the gun, it is 20 years; and if you caused great bodily injury by means of the gun, it is 25 years to life.

Robbery is a "strike" on your criminal record under California's Three Strikes Law. This means that if you get a second strike, your sentence will be doubled; and if you get a third strike, you will be sentenced to from 25 years to life in state prison.

Common Defense Strategies Against the Charge of Robbery

At the Criminal Law Office of Leah Legal, we use a wide range of effective defense strategies to defend against the charge of robbery, whether 1st or 2nd degree, and to secure a dismissal, an acquittal, or a reduced charge or sentence. Here are some of the most common defenses we use in these types of cases:

Other offenses that often come up during robbery cases, and are charged either alongside or instead of the charge of robbery, include the following:

At Leah Legal, we stand ready to assist you in your hour of need by providing you with the best possible legal representation across a wide range of practice areas, including robbery defense. We have handled numerous robbery cases and have a long track record of doing well by our clients by obtaining the best possible outcome for them.