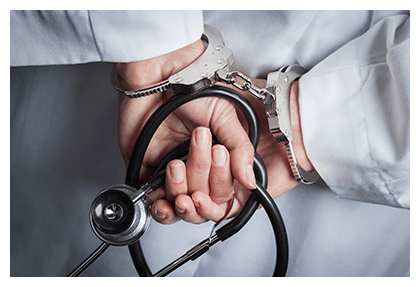 If you are facing charges of health care fraud in Los Angeles or Southern California, you could be looking at years in jail and thousands of dollars in fines if convicted, besides the loss of certain professional licenses, a damaged reputation, and a permanent criminal record. To avoid these consequences, or to at least minimize them as much as possible, it is critical to waste no time in availing yourself of a passionate and compassionatedefense attorney with long experience in defending health care fraud cases.

At the Criminal Law Office of Leah Legal, we have been successfully defending those accused of health care fraud in California for many years. We have an intricate knowledge of the details of the relevant state statutes and are fully familiar with the inner workings of local L.A. Area court processes. Contact us today at 818-484-1100 for a free legal consultation, and we will work tirelessly to help you with your case.

How Is "Health Care Fraud" Defined in California?

Health care fraud, or "health insurance fraud," is a type of insurance fraud which is committed by health care providers who submit false or inaccurate claims to either government-run or private insurers for the purpose of defrauding the insurance company out of funds and wrongfully obtaining financial benefits for themselves.

Unfortunately, this type of insurance fraud is not at all uncommon in California, or throughout the U.S. for that matter. Part of the reason for this problem is the great complexity and depersonalization of our nation's health care system, where much of the money paid to health care providers comes not from the patient but from insurance companies. The payments system may be very complicated and can leave much room for fraud to slip by.

On the other hand, the top-heavy bureaucratic health care payment system is so complex that it becomes very easy for people to make an honest mistake and then get accused of committing fraud.

Much of the health care fraud that goes on involves Medi-Cal and other state-run insurance programs designed to assist the elderly, disabled, and low-income families who can't afford private insurance. Thus, prosecutors are often zealous to score points by protecting the vulnerable and protecting the taxpayer, but oftentimes, the defendant may be completely innocent.

Normally, health care fraud is filed against doctors, nurses, and other medical professionals; but it is also commonly filed against secretaries and clerks who work at hospitals and in offices of private practices. Typical allegations include: billing for services never received, overcharging, and double charging.

There are a number of different types of California health care fraud, and more than one statute addresses the potential abuses that can occur in relation to health insurance claims. Some of the most common types of health care fraud are looked at briefly below.

California Penal Code section 550 criminalizes the submission of a claim to a health insurer when the patient never actually received the service for which the claim is being made. These "ghost claims" may name real patients or use fictitious ones, but the services named in them never occurred.

Besides simply inventing a claim out of thin air, other types of fraudulent claims submissions include: claims for services performed but that the patient never actually needed; "upcoding," meaning submitting a claim for a procedure that costs more than the actual procedure performed; and adding in extra charges to patients who use insurance that are not charged to those who pay out-of-pocket.

Oftentimes, the correct service and claim is submitted, but it is submitted twice (or more) rather than just once. This double billing practice is also addressed in Penal Code section 550. Accidental double billing is also a common occurrence, so the prosecutor must work hard to prove there was an intent to defraud rather than there being only a simple mistake.

Penal Code section 550 also deals with the practice of re-billing insurance providers for past undercharges but neglecting to also bill them for overcharges that were discovered. Medical billing mistakes happen, and thus, in reviewing their accounts from time to time, health care providers may discover some discrepancies. A partial, one-sided correction of such discrepancies, however, amounts to health care fraud.

California also specifically criminalizes the preparing of any written documentation that will be used to support a fraudulent claim of any kind. This can add extra punishment to those who commit fraud, but it can also get innocent parties, who simply worked for a medical professional as a secretary, charged with health care fraud. This is a good example of where a skilled defense attorney can help establish you knew nothing of the fraud and did not benefit from it.

What Must the Prosecutor Prove?

In order to prove beyond all reasonable doubt that the defendant committed health care fraud and gain a conviction, the prosecutor must do more than simply show that a wrong claim (such as any of the kinds mentioned above) was submitted.

It must also be demonstrated that the defendant was aware that the false claim being submitted was such or were aware that a document prepared to support a false claim would be used for that purpose. It must be shown that an intent to defraud the insurer and benefit financially as a result existed. With very few exceptions, the element of intent is required before an action counts as California health care fraud, and this is often the most difficult element of the crime for prosecutors to prove.

At Leah Legal Criminal Defense, we have the experience in defending against the charges of health care fraud under California law. We understand how to build a solid defense to each case we handle and how to challenge the evidence and the arguments of the prosecution.

Aside from disputing the facts as to what claims were submitted and by whom and as to what was the correct amount to be billed, two common defenses against the charge of health care fraud are:

If a secretary or assistant to someone making fraudulent health care insurance claims prepares the paperwork but does not realize that fraudulent claims are being made, he or she cannot be convicted of health care fraud. Without having the knowledge of the fact that the claims were fraudulent, no crime was committed by such an assistant.

If a doctor or other health care professional submits claims that he or she believes to be accurate, accidentally makes a double charge, discovers a past undercharge but inadvertently fails to notice a past overcharge, or makes a mistake as to the amount or the type of charge to be submitted, it is a mistake and not considered fraud. Without an intention to defraud the insurer, the defendant is innocent of health care fraud.

While there may be various factors that play into the exact sentence a person convicted of health care fraud receives, including the specific nature of the offense and the defendant's past criminal record, in general, health care fraud is punished more severely based on how much money was stolen or that the defendant attempted to steal.

If a fraud claim is over $950, or if a series of fraud claims within a single year total over $950, the punishment will be more severe than if $950 or less was involved.

For fraud claims under $950, health care fraud is a misdemeanor offense, punishable by:

If fraud claims exceeded $950, health care fraud can be either a felony or misdemeanor. As a misdemeanor, it is punishable by:

As a felony, it can be punished by:

Normally, it is health care workers who are charged with health care fraud. Thus, the revocation or suspension of their professional licenses upon a conviction is potentially another serious part of the sentence. Loss of one's job or practice and loss of customers or potential new customers are major impacts of losing one's license temporarily or permanently.

Along with or in place of health care fraud charges, there are other offenses that may come up in a typical health care fraud case. While the full list would be too numerous to list here, we have included the most common related offenses:

California Penal Code section 550 not only criminalizes committing health care fraud personally but also assisting others to do the same. It also makes it a criminal offense to solicit someone else to submit a fraud claim in your behalf or to conspire with other people to submit fraud claims. All of these acts make you an accomplice in committing health care fraud and expose you to punishment equal to that of the main perpetrator.

As the California Medi-Cal insurance program covers many low-income, senior citizen, disabled, and other needy patients, it is a very large insurer and a major target for health care fraud. And those who specifically defraud or attempt to defraud Medi-Cal can be given additional punishments under Welfare & Institutions Code 14107 besides those sentenced under Penal Code section 550. This double sentencing is seen as appropriate because of the vulnerable nature of the people Medi-Cal is meant to protect and because of the extra costs being thrust upon taxpayers when Medi-Cal fraud occurs. Finally, note that when patients submit false claims to gain extra benefits or lie in order to qualify for Medi-Cal, that is also a form of Medi-Cal fraud.

There are two types of prescription fraud that are prevalent in California, both of which are under the umbrella of health care fraud. First, health care professionals may issue prescriptions to those they know should not be taking a certain drug simply to gain extra income. Second, patients commit prescription fraud by "shopping" around for multiple doctors to fill out for them the exact same prescription.

While submitting false claims for California workers' compensation insurance benefits is a separate crime, yet, Penal Code section 550 also covers such claims as part of health care fraud. It is possible, then, to be charged with both workers comp and health care fraud for the same offense. The reason for this seeming discrepancy is that health care services will normally be provided as part of what a workers comp claim covers. Workers commit this type of fraud when they lie about where they were injured, fake an injury, or exaggerate the severity of an injury to receive extra benefits. Employers can commit workers comp fraud by misrepresenting the conditions in which an employee worked when he or she was injured. And doctors can commit workers comp fraud by assisting in the submission of a fraudulent workers comp claim in order to get the extra business.

At the Criminal Law Office of Leah Legal, we stand ready to assist you in your hour of need with top-tier legal advice and representation in your health care fraud defense case. We have deep experience in this practice area and will fight tenaciously to secure the best possible outcome to your case.