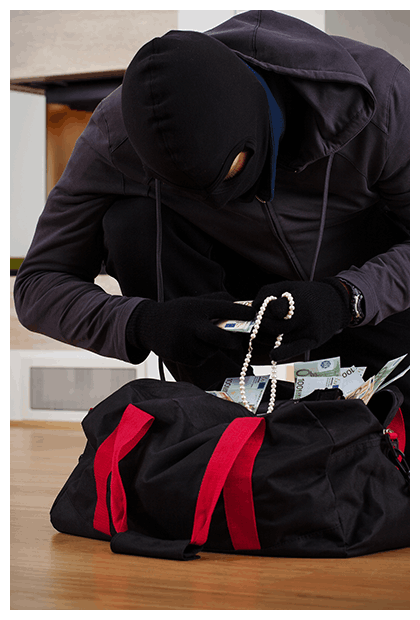 If you have been charged with the crime of receiving stolen property, under California law, you could be facing significant fines and/or jail time if convicted. By acting quickly to secure the services of a criminal defense attorney experienced in this specific practice area, you will greatly improve your chances of winning in court.

At the Criminal Law Office of Leah Legal, we have a long track record of successfully defending clients accused of receiving stolen property. We have a thorough understanding of the details of the relevant California statutes and a deep familiarity with local L.A. and Southern California court processes that are involved.

Contact us anytime 24/7, for a free consultation, by calling 818-484-1100, and we will waste no time in getting started at helping you with your case.

How Is "Receiving Stolen Property" Defined in California?

California Penal Code Section 496 criminalizes "receiving stolen property," defining the crime as accepting, hiding, buying, selling, or wrongfully withholding from its rightful owner, the property in question. The crime can be either a felony or a misdemeanor, depending on the facts of the case and the defendant's criminal record.

It makes no difference how the property was stolen, by grand/petty theft, by pickpocketing, by shoplifting, by robbery or burglary, by embezzlement, or any other method. But it is required that the person receiving the stolen property knew it to be such at the time of its reception.

To gain a conviction for receiving stolen property, the prosecution must prove beyond all reasonable doubt the following elements of the crime:

Received - What does it mean to "receive" stolen property? The legal definition used in relation to Penal Code section 496 is to simply take it into your possession. That need not mean, however, to physically lay hold on it.  Constructive possession applies if the property is "under your control." Also, if you are one of multiple people who possessed the property (joint possession), it still counts as possession.

Awareness That the Property Was Stolen - Note that for property to count as having a "stolen" status, it doesn't matter which particular theft crime was committed in order to gain possession of it or who committed that crime. And if intimidation was used to gain consent from the owner to give up his/her property, it is considered extortion and the property still counts as having been stolen.

In some cases, a thief or an accomplice may plant stolen goods on another person's property, his clothing, his effects, in his car, or even on his person without his being aware of it. This is done to escape being detected as the thief while the case is "hot." Later, the thief will attempt to recover the stolen property. Thus, it is required that you knew of the presence of the stolen property in order for you to be guilty of Penal Code section 496, receiving stolen property.

Note that receiving more than one piece of stolen property at one time is but a single count of Penal Code section 496, but the prosecution can charge you with multiple counts of this particular crime if there were multiple occasions on which the alleged reception of stolen property took place.

Special "Rules" for Owners of Specific Kinds of Businesses

Under Penal Code section 496, there are specific classes of business owners who need not have known of the fact that received property was stolen in order for them to be convicted of receiving stolen property. One such class of businessmen is swap meet vendors. But in addition to these types of vendors, many businesses that are primarily focused on obtaining and reselling pre-owned personal property fall under this special exception.

If property was obtained by a swap meet vendor or other resale agent under circumstances wherein a reasonable inquiry ought to have been made into whether the person selling the property to him/her was the true owner, and no such inquiry was made, guilt under Penal Code section 496 can apply. In essence, the law says that a suspicious situation must be investigated before the property is accepted.

In some cases, as with junk or scrap metal dealers, or when a book with a library impression is acquired by a book dealer, due diligence must be done regardless of whether there were any suspicious circumstances.

It is very easy for owners of these types of businesses to be falsely accused of receiving stolen property or to become guilty of Penal Code section 496 when they had no knowledge of the property's stolen status. Thus, great care must be exercised and a good lawyer should be consulted early on if a problem arises.

Receiving stolen property (PC 496) is a wobbler offense in California, meaning it can be charged as either a felony or misdemeanor. Which option the prosecution takes will depend on such factors as the value of the stolen property, how obvious its stolen status is thought to have been, and other details of the specific case. It will also depend on the past criminal record of the defendant.

However, if the value of the property stolen is $950 or less, the same parameters that apply to petty theft, receiving stolen property can only be charged as a misdemeanor. Before Prop 47 was passed in 2014, it was possible to charge low-value instances of Penal Code section 496 as felonies, but this is not allowed today.

When charged as a misdemeanor, the crime of receiving stolen property is punishable by:

When charged as a felony, receiving stolen property is punishable by:

Also note that a civil tort action to sue for damages can be filed separately from the criminal charge. If that lawsuit is won, it can result in recovery of three times the damages inflicted, with the losing party paying the legal costs of the plaintiff as well.

Finally, foreign nationals in the United States face could face deportation if convicted of Penal Code section 496, depending on the details of the case, as it can be classed as a crime of moral turpitude. And such a conviction can also prevent even legal immigrants from reentering the U.S. after traveling abroad, and prevent acceptance of a green card or other immigration application. Non-citizens accused of receiving stolen property are wise to seek a lawyer who understands both PC 496 and federal immigration law, or else a separate lawyer for each area of expertise.

At Leah Legal Criminal Defense, we use a variety of defense strategies to defend against the charge of receiving stolen property (PC 496), always tailoring the specific kind of defense employed to the nature of the case at hand. Some of the most common defense strategies we successfully use in these types of cases include:

Other crimes closely related to Penal Code section 496, receiving stolen property, and oftentimes charged along with it or in its place, include the following:

A good defense lawyer can help to defeat both PC 496 and other related charges that may be filed against you. In cases where a total victory is not possible, an experienced criminal defense lawyer can also apply his/her negotiation skills to get your charge and/or sentence reduced as part of a plea bargain.

At Leah Legal, we have the legal expertise and the undying commitment to each and every client to defeat charges of receiving stolen property. We will know how to build a solid defense for your case and to secure the most favorable outcome possible.