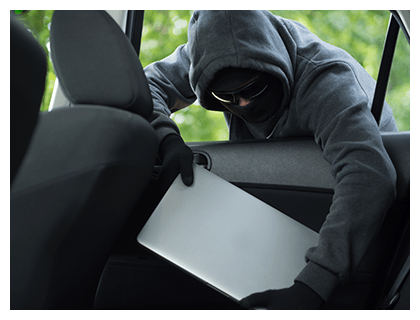 If you or a loved one have been recently arrested on the charge of grand theft in Los Angeles or throughout California, you are facing potentially dire consequences upon a conviction. Long terms in county jail or state prison are possible punishments, and only by enlisting the help of a skilled criminal defense lawyer can you maximize your chances of a favorable outcome to your case.

At the Criminal Law Office of Leah Legal, we have the long experience, legal expertise, and intricate knowledge of the L.A. and Southern California court system to fight for and get the best possible outcome to your case. We put ourselves in your shoes and fight tenaciously for your future as if it were for our own, because that is the value we believe each and every client deserves.

How Is Grand Theft Defined in California?

In California, grand theft is defined under Penal Code Section 487 as the "unlawful taking of the property of another person when that property is valued at over $950."

Grand theft can be charged as either a misdemeanor or a felony, depending on the facts of the case and on the criminal history of the defendant. A conviction can bring not only incarceration but also loss of professional licenses and a permanently damaged reputation.

While the basic definition of grand theft given above is accurate,  it is important to know that there are a number of different specific types of grand theft charges, each differing in regard to the manner in which the theft was carried out.

The basic types of grand theft under California law are as follows:

Grand larceny includes the following elements which must be proved beyond a reasonable doubt: taking of another's property valued over $950 without permission, with intent to deprive the owner of all or a significant portion of its value, and while moving the taken property any significant distance, for even a short period of time.

"Recklessly asserting a thing as true with no basis for believing it to be true, failing to give out legally required, important information, or making promises with no intent to keep them can all also count as ‘false pretenses’." It is required, however, that the false pretense was relied on by the property's owner as one major factor in making the decision to dispense with his/her property.

In addition, either a document of some kind (a false token) that puts the false pretense into writing, two witnesses to a verbally given false pretense, or one witness along with another form of evidence are necessary for a conviction. This requirement exists to guard against letting those who hand over property 100% legally simply changing their minds later and accusing the other party of using false pretenses in order to get their property back.

With grand theft by trick, it must be shown that the defendant knew that the property was owned by the other person and knew he/she lacked permission to take it. Otherwise, it would be only a mistake or a misunderstanding.

The property must, however, have been taken or used in a fraudulent manner so as to benefit the person put in trust of the property instead of its owner.

And there must have been an intention to deprive the owner of his/her property, whether permanently or for a limited time only. The intention to return the embezzled property does not exonerate, though that could later on become a mitigating factor that might help the defendant get a lesser punishment.

Finally, note that the jury need not agree on which type of grand theft was committed in order to convict, so long as they agree that some form of grand theft did occur. If, however, the jury cannot decide on whether it was grand or petty theft, only a petty theft conviction will hold.

Petty theft and grand theft are generally exactly equivalent under California law except for the property stolen being above or below the mark of $950.

However, before Prop 47 passed in 2014, grand theft automatically applied to crimes where the stolen property was, or at least included, any of the following:

It was also automatically grand theft if the property was taken directly off the victim's person (body, clothing, or held container).

Today, the above-mentioned aggravating factors can still turn petty theft to grand theft (even without the value of the property being over $950), provided the defendant has a sex crime or serious felony crime on his/her criminal record, but not otherwise.

The theft of an automobile will normally be grand theft, however, if the car is of relatively small value, it would be petty theft.

Additionally, if one embezzles money from the same source in numerous small transactions that add up to over $950 across a one-year period, it will be grand theft.

In the case of committing grand theft by means of or while in possession of a firearm (grand theft firearm), you will always face a felony charge. This can get you 16 months to 3 years in state prison, and it will also be a strike on your criminal record under California's Three Strikes Law (which is not true of most other grand theft felonies).

Besides the "basic" punishments for grand theft convictions, the sentence can also be enhanced with extra time in prison if it is a felony charge and if the value of the property is exceptionally high.

The enhancement schedule runs as follows:

Also note that all pieces of property taken under a "common scheme" will be added together for purposes of determining the value stolen in an "act of theft." And if there were two or more schemes involved, you can be charged with multiple counts of grand theft and get jail/prison time for each count.

When the property stolen over $950 in value was an automobile, you will be charged with grand theft auto under California Penal Code section 487.d.1. The charge is not essentially different than grand theft in general, but it can result in a somewhat different penalty. Most likely, it will be a steeper penalty since grand theft auto is usually charged as a felony. A good attorney may be able to get the charge reduced, however, to Vehicle Code Section 10851 – joyriding - in a plea deal in some cases.

However, there are cases where the value of the property is a point of contention. If goods had not been appraised for many years before being stolen, the owner may have had a too-high estimate of their value. Depreciation could have set in and/or the items may have been in imperfect condition.

A charge reduction to petty theft could lessen the sentence to a fine of up to $1,000 and/or a maximum of 6 months in county jail.

Also note, however, that "petty theft with a prior", Penal Code section 666, can result in more severe punishments than for simple petty theft. If the defendant has a previous violent crime, sex offense, or a theft-related elder abuse conviction on his/her record, it is possible for even petty theft to become a felony and lead to penalties not too distant from those for some grand theft convictions.

At Leah Legal Criminal Defense, we always take the time to painstakingly investigate and analyze each case we take on and to build a solid, "customized" defense that maximizes your chances of securing the most favorable outcome possible. Yet, over our years of serving the Los Angeles community, we have also become fully familiar with the most effective common defense strategies used in grand theft cases. These include:

At Leah Legal we have successfully handled numerous grand theft defense cases in Los Angeles and Southern California in the past, and we stand ready to come to your aid in your hour of need. Attorney Leah Naparstek will know how to build the best possible defense for your case and get you the best outcome possible, be that a dismissal, acquittal, or a reduced charge and/or sentence.