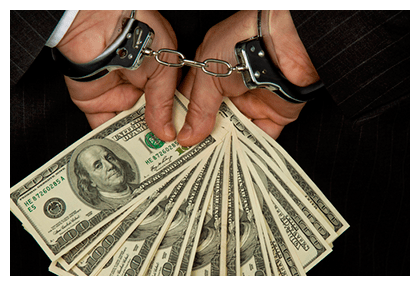 If you are facing charges of embezzlement in the state of California, you may be looking at long incarceration terms, heavy fines, and other severe sentencing elements upon a conviction. With these kinds of penalties involved, it is critical to avail yourself of the most experienced legal defense possible, for the results of your trial will determine your future for many years to come.

At Leah Legal, we have intricate knowledge of California's embezzlement statutes, great familiarity with the inner workings of the local Los Angeles court system, and a long track record of winning our clients the best possible outcome to their cases.

How Is "Embezzlement" Defined Under California Law?

California Penal Code Section 503 covers the "white collar crime" known as embezzlement. The crime is defined as taking advantage of being trusted to manage or care for the property of another person and using the property for your own benefit instead of for that of the owner.

Another misconception is that embezzlement only occurs if the person who wrongfully took or used another person's money or other property intended to actually keep it. In fact, it is still regarded as embezzlement even if the perpetrator was only "borrowing" or "temporarily using" the other person's property.

To gain a conviction on charges of embezzlement, the prosecutor must prove beyond a reasonable doubt the following "elements of the crime:"

Relationship of Trust - There are many specific examples of a "relationship of trust" which must have existed in order for a theft to count as an act of embezzlement. Often, it is an employee-employer relationship, in virtually any type of job setting. It can also be a valet parking attendant and the owner of a car, a trustee or property manager, or a host of other relationships. On the other hand, there must be evidence of trust beyond just the fact that someone was an employee of the alleged victim.  In fact, because of this requirement prosecutors sometimes have difficulty in establishing that trust truly existed.

Fraud - It is also necessary that the defendant's actions were "fraudulent" in the sense that they constituted of "taking undue advantage of" the plaintiff and/or causing him/her financial loss by a violation of a trust. And not only must loss have been caused to the victim, but undeserved gain or benefit must have accrued to the perpetrator.

Intent - Finally, note that the benefit gained cannot have been accidental or incidental. There must have been an intention to deprive the owner of the property or its use and to wrongfully take gain to oneself. However, it makes not difference for how long the property was taken or if the defendant intended to return it — it would still count as embezzlement.

There are a number of different varieties of embezzlement, and the punishments vary for each class. The differences in how severely an embezzlement crime is punished mostly hinge on the type and value of the property involved.

If the value of the embezzled property was over $950, or if the property is an automobile or firearm of any value, it is "grand theft." If a number of small sums were embezzled across a one-year period that add up to over $950, this is also grand theft.

Grand theft embezzlement can be filed as a felony or a misdemeanor, but when a firearm is embezzled, it is always a felony.

You can also face extra time behind bars on a grand theft conviction if the property is of especially high value, according to the following rules:

In general, "petty theft" is defined in California as the stealing, by embezzlement or otherwise, of property worth $950 or less. It is often more practical, however, to simply remember that anything not chargeable as grand theft is automatically petty theft.

In definition, there is not substantial difference between petty and grand theft other than the type or value of property taken. Sentencing for petty theft, however, is much lighter than for grand theft.

Petty theft is punishable by:

One important aggravating factor that often comes up in embezzlement cases, and which results in punishment enhancements upon a conviction, is that of "elder abuse." (See practice area on Elder Abuse Penal Code section 368 for more detailed information about this crime).

Normally, this occurs when embezzlement is perpetrated against a senior citizen (65 years old or older). However, the same rules also apply if the victim was a dependent adult but perhaps with a mental/physical disability.

Elder Abuse (PC 368) can be either a misdemeanor or felony. As a misdemeanor, it incurs a fine and up to 12 months in county jail. As a felony, it can get you 2 to 4 years in state prison.

At Leah Legal, we understand that even when a conviction cannot be totally avoided, there are often "mitigating factors" that we can bring to the judge's attention, which may result in a lesser sentence.

One such factor is having returned the embezzled property of your own accord before being formally charged. This is not a defense, but it is a possible mitigating factor. Turning yourself in and only committing the crime under intense pressure to provide for your family might also be considered as mitigating factors.

At the Criminal Law Office of Leah Legal, we understand how destructive an embezzlement conviction can be to our clients' careers and future lives, and we take great care and effort in developing a defense strategy ideally fitted to the details of each case we take on.

But as unique as each case is, there are also common basic defense types that we commonly use to successfully defend against charges of embezzlement. These include the following:

If you honestly believed that the property you took, converted, of used for your own personal benefit was your own, you cannot be convicted of embezzlement.  However, there are two caveats to be aware of. First, this defense will not work if you in any way attempted to hide what you were doing with the property from the owner, from police, or from others. Second, this defense is invalid if you took the property to satisfy a debt that the property owner owed you.

It can be challenging for prosecutors to prove the element of criminal intent beyond all doubt, but unless they do so, no conviction can be gained. Without intent to take or wrongfully use the owner's property, it would at worst be a serious mistake or unfortunate misunderstanding, but not embezzlement. There must have been a purpose to deprive the owner of what was rightly his or hers in order to take benefit from the property for yourself.

It is not at all uncommon to be falsely accused of the crime of embezzlement. The fact that this crime always involves a preexisting relationship with the alleged victim increases the chances of false accusations being leveled by someone "with an ax to grind." It could also be that the true embezzler is looking for a scapegoat or that someone who mismanaged his own finances and lost money wants to blame someone else for his own mistakes.

Other crimes that are often charged along with embezzlement or in place of embezzlement include the following:

In California, "fraud" is committed when the actions of one person, or the information that person gives or withholds, cause someone else to be unjustly deprived of their property (or the use/full value of it) and/or cause the fraudster to enjoy an undeserved benefit of some kind.

There are many different types of fraud, including insurance fraud, credit card fraud, and real estate fraud, which are often charged along with embezzlement. Fraud crimes will be punished by heavy fines and jail/prison terms of various lengths, depending on the value of the property taken.

PC 424, the crime of misappropriating public funds, is very similar to that of embezzlement. However, it applies specifically to the knowing misuse of a government position to misappropriate government funds. Typically, this crime is committed only by government employees.

However, accidental misappropriations or that which deal in only very small amounts of money are not chargeable under PC 424.

Misappropriation of public funds is a felony charge and is punishable by 2 to 4 years in state prison.

In many cases, one can be charged with both embezzlement and forgery, as when for example a person forges a signature to his/her employee's check before cashing it. Whenever one creates or alters any kind of document to enable embezzlement or any kind of theft crime, it is an act of forgery.

Forgery can be punished as a misdemeanor by up to 12 months in jail or as a felony by 16 months to 3 years in jail.

While few think of burglary as having any connection to embezzlement, in fact, those who enter a building (including a workplace) with full intention to commit embezzlement once inside are technically "burglars" under California law.

Burglary is punishable as a misdemeanor or a felony when 2nd-degree, but always as a felony when 1st-degree. The difference is that in 1st-degree burglary the building that was entered was inhabited.

At the Criminal Law Office of Leah Legal, we have the both the legal expertise and the unflinching commitment to each and every client it takes to win a favorable outcome even in high profile, high stakes cases like embezzlement defense. We know how to build you a solid defense, challenge the evidence brought against you, and anticipate and counter the legal moves of the prosecution. When necessary, we also can deploy our well seasoned negotiating skills to win you a reduced charge or a lighter sentence as part of a plea agreement.

If you or someone you love have been accused of the crime of embezzlement, contact us 24/7 for a free consultation by calling 818-484-1100, and we will walk you through the law, your rights, and your best legal options.